How to Capture Great Basketball Audio During a Pandemic

Videographers are often known for their creativity. Their unique shots can make or break the movie or documentary they’re trying to make.

But what happens when you can no longer mic or boom athletes because of an international pandemic? How do you capture the audio you need? How do you get creative in this setting?

Baili Martin was confronted with that exact problem during her shoot for a basketball documentary. Filming was starting right as Covid began sweeping the US. So, Baili turned to the Sound Shark and parabolic microphone technology to help her get the sounds she needed, all without getting “too close.”

Paul Terpstra: So Baili, what were your challenges, that related to audio, when you started this basketball documentary?

Baili Martin: So my biggest challenge was because it started in January of 2020. It was at the height of COVID and you have all these basketball players playing without masks and two-hour long practices, getting really sweaty and exhaling a lot. We had to stay away as media and had very limited access to what we could do as the regulations got stricter. The ability to capture audio from a close distance without interaction was just minimal. So that was when we began wondering, “OK. How are we going to do this?” while still getting a good production quality.

This shoot did keep me up at night, thinking about all the ways that I could mic it and not mic it. I could just overdo it or just minimally do it, but I wanted to make sure that there was a good, clear picture for sound coming across because they wanted cinematic quality. So not being able to mic up the players was a difficulty and was getting in the way of recording certain conversations.

So yes, it was just plaguing me. Like how do I get there if I can’t boom them, if I can’t mic them, if I can’t get near them because of COVID? What do I do? So, I started asking around and heard about Sound Shark. I heard about the parabolic dish that you have created and I thought maybe that might be my solution.

Paul Terpstra: And so how did it work out for you?

Baili Martin: So when I started using Sound Shark, it was about halfway through because we were still working on getting the people to be comfortable with us filming them and just learning our boundaries.

So once we had that established, I was able to place the Sound Shark and do some tests to see how great it was for getting the conversations that were specifically happening right below the hoop or near the key of the basketball court.

That box was the main area I was trying to grab sound from, because most of the time that’s where guys are talking smack after they just make a shot. You’re also going to get the great “swoosh” sound from there too. (There are multiple ways that I looked up on how you can mic the basketball hoops to really get that sound.)

But we were also battling frequency issues too. So sometimes it’s had to be a hardline or just had to be recording to a device that I attached back to it. So the Sound Shark provided multiple options to be able to have that, but to have it in a small form factor but capturing a large area of sound at the same time rather than just having a lavalier at the base of the hoop like most basketball videographers.

But because of all this, not having access and not having frequency channels and not having a time to be able to do all this and setting up real quick because it’s documentary. I developed a method that was like really quick and easy for me. So I put the Sound Shark on a Dinkum clamp and clamp that to the back just right behind the basketball hoop and just a little up and away so it wouldn’t be hit by basketballs. I learned by trial and error for that.

Paul Terpstra: So do you think it improved your final product?

Baili Martin: Yeah, it definitely did. Once we found our rhythm and they did become more comfortable with us. We were able to boom some conversations and I was able to actually move it to the outer edges of the auditorium.

Since it was COVID, I was trying to get the sound of the big, empty stadium and how no one was here. Sometimes they would have the coaches just out and about and just getting that sound in addition to the really close sounds from me mic-ing them, and them just like yelling, or music as they played.

It really helped round out that sound and kind of give it more of that cinematic feel too instead of if we only have this one single sound source and it’s just the boom because that’s all that they’re able to allow us. So it gives different options and I felt happy that I was able to give that for the documentary and for post-production to play around with.

Paul Terpstra: OK. Yeah. It makes the video a lot more interesting if you feel immersed in the middle of it, definitely.

Baili Martin: Yeah. You can see my first iteration and I didn’t really take the last but it’s pretty much near that.

I’m starting off with this picture. So this is the basketball court. This was just one side that we’re filming and this is their main court. They had a smaller scrimmage court which we had a different setup. But this one worked mainly for their main court and this was where they also had one basketball game. COVID kind of put an end to that unfortunately. 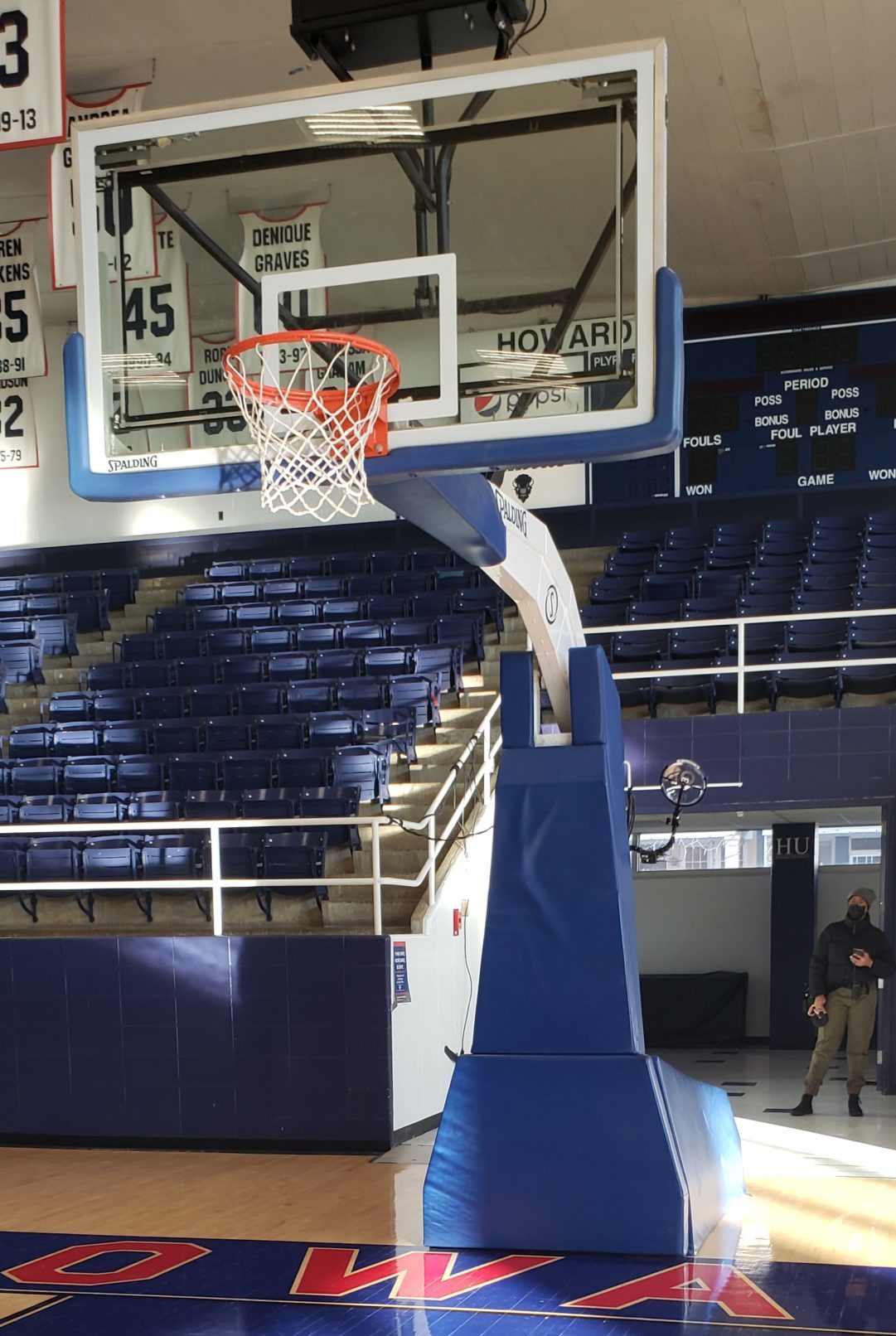 But the one we were able to get, this was what I deployed. So I started off with trying to play around with where I placed the parabolic mic. I will zoom in and go to a closer setup. So you see here I have the wireless setup.

I had it going to a G3 that went to my mixer and that is how I was able to capture that but also be mobile and not be close because we weren’t allowed to be in the same areas. We had to be up in the bleachers. So back in this area behind these white bars.

So, our reach was definitely lacking if we hadn’t had the Sound Shark. So it was really nice to have this and you see it’s in the Dinkum clamp. I was able to really adjust it and I moved this up higher as we got more into it, knowing that’s where the basketball usually went and getting it knocked down. (I realized this is not the safest place but with my height restrictions this was the highest I could get to.)

Then, when we weren’t deploying the Sound Shark right here and we were able to get closer, the crew was able to be on the court around this area, just behind the out of bounds lines. I started putting the Sound Shark up in the stands. So we would use a tripod and just mirror where the camera placement would be.

I would have the Sound Shark here and below would be moving around the instructors and the coaches and it the physical therapists; all those people would be just below this area. I would capture a little bit of their ambient shadow. I didn’t really want to get full conversations and we weren’t allowed to at certain times.

So it was just a good mix adding to it, getting the players and all their yelling and what not when the music wasn’t going… and sometimes music was great! Like I said, rounding out the sound instead of just having just the boom audio and the basketball sounds.

Then sometimes, as you see here, I did wire this once since we couldn’t deploy wireless [due to interference]. So that was an also great option to have. I got an adaptor so that the lavalier microphone could switch over. But that flexibility was very nice.

Paul Terpstra: So overall, is there anything that you would say to someone that was considering Sound Shark and is on the fence about whether it will work for them or not?

Baili Martin: I would definitely recommend getting the Sound Shark especially if you’re doing any basketball or sports-related documentary.

It’s the best if you’re trying to get it for that specific sound but you can’t be there [to mic it], even if it’s not for COVID reasons.

You’re adding this to your library of sounds, because maybe that’s the kind of thing you want to get.

We really didn’t get to use it in other applications in terms of [other sports] like football. But I know that there’s a bigger Sound Shark [for that]. I definitely would say to try out all the different options. I definitely went for a smaller form factor because of cost and being able to maneuver around real quickly since I was working on a documentary.

We had to have everything up and packed really quick and deploy it really quick as well. So the Sound Shark was really perfect for that, being able to capture additional sounds even if you’re booming, if you’re doing a one-person show.

You can have other options, it’s a nice way to just round out your sound kit if that is something that you’re looking for.

Paul Terpstra: All right. Well, again, thank you so much for your time Baili. I really appreciate it.

Baili Martin: Well, thank you. I appreciate it too. Thanks for having a great product. I like using it.