How exactly does a parabolic collector function?

The parabolic collector is designed with a unique shape so that anything approaching the dish, that is parallel to the dish’s center line, is then focused onto a single point. The key to understanding this particular shape is a mathematical formula known as a “parabola” – which is why parabolic collectors are named as such.

It doesn’t matter what energy you’re trying to focus within the dish, it can focus light, sound energy, or electromagnetic energy. It operates in the same way as a satellite dish, which gather electromagnetic signals from satellites in space.

German physicist Heinrich Hertz constructed the world’s first parabolic reflector antenna in 1888 [source Wikipedia], however the principle of parabolic reflectors have been known since classical antiquity. They are described in the famed mathematician Dicoles’s book On Burning Mirrors, in which he proved that parabolas can focus a parallel beam to a point.

This same principle has continued through the ages, and in fact, Acoustic Mirrors detected enemy aircraft via this same effect before the advent of radar.

But what is a parabolic microphone?

A microphone, as you likely know, is an electronic element that converts sound pressure into an electric signal. When this microphone is mounted inside a parabolic dish, it becomes a “parabolic microphone”.

The special shape of the parabolic dish collects the incoming pressures (sound waves), and focuses it onto a single point. The microphone then converts this into an electrical signal. The sound ends up being amplified because the sound energy from a large area is focused onto a single point. In addition, the electrical signal from the microphone can also be amplified.

Many parks, museums, and science centers have similar dishes

If you have ever encountered dishes enabling a whisper to be heard across a great distance when standing at the focus point of a large parabolic dish, these operate on the same premise as Klover’s parabolic collectors. They are often called “Whisper Dishes” and can be found at museums and science centers.

How important is the shape of the dish?

The shape is critical to its performance. KLOVER MiK’s parabolic collectors are created to tolerances of only a few thousandths of an inch. Sure you can collect the sound from an inexpensive, poorly-formed dish. However, this sound will come out garbled and distorted.

Furthermore, because the shape isn’t perfect, the sound energy can end up scattered—or not focused on the single point—significantly reducing the amplification.

Learn More about why the Klover MiK is the best parabolic mic in the industry. 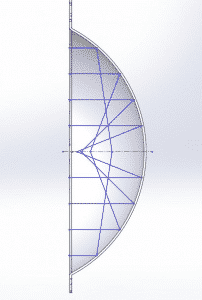