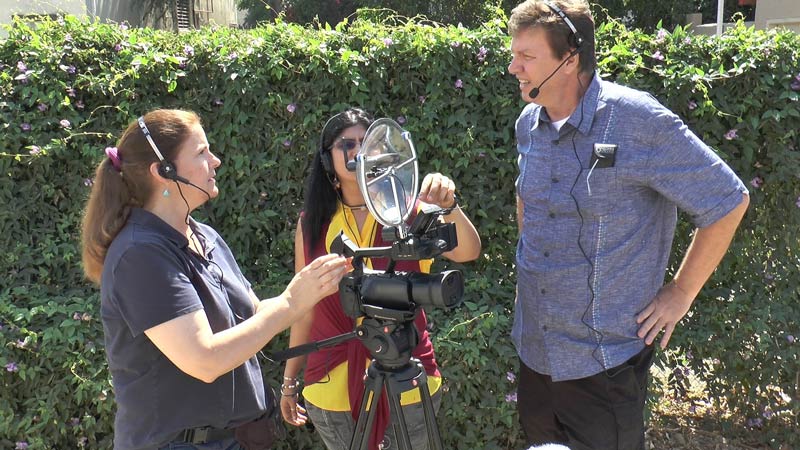 Why would you use a small parabolic mic instead of a shotgun mic?

Shure, one of the leading microphone manufacturers, list this misconception as one of the Top 8 Microphone Myths. To quote, “The reality is that microphones do not reach out and grab the sound from a distance. They merely measure pressure variations right at the diaphragm itself.” and “The one specification of a microphone that loosely corresponds to the concept of reach is directionality or the microphone’s polar pattern. The directional characteristic of a microphone describes how much sound it picks up from ambient sources compared to how much it picks up on-axis.”

It may be worth reviewing how shotgun mics work. As the Sound on Sound website explains, “All shotgun mics employ a standard directional capsule — usually a super cardioid — but with a long, hollow, slotted ‘interference tube’ attached to its front surface.” and “The idea of the interference tube is that the wanted on-axis sound passes straight down the length of the tube to the capsule diaphragm unimpeded, but the unwanted off-axis sound has to reach the diaphragm by entering the side slots.” As Shure explains “On-axis sounds share a uniform path length to the microphone capsule. Because they arrive at the same time, they end up being what we call “in phase” and are thus accepted by the mic element and passed down the audio circuit.”

The interference tube has its own issues, however. As the Quora website states, “The design has drawbacks: different frequencies have different wavelengths and therefore each frequency is affected in a different magnitude. This causes “coloration” for off axis sounds as components of the original waveform are attenuated differently according to frequency. This is unavoidable because of the principle of operation.” and “Take a look at the pickup pattern of a lobar microphone. all frequencies are equally represented at 0 degrees, but they are attenuated as you go off axis in differing amounts, resulting in coloration vs the original sound spectrum.”

Many common “shotgun” microphones utilize a plastic and paper tube instead of an interference tube with slots. Our experience is that this design provides very little directionality. The photo on the right is a Rode Video Mic Pro with the foam cover removed.

Regardless of the design, the interference tube does not provide any amplification. They are simply attempting to block out off-axis sounds. Any amplification has to come from an electronic amplifier built into the shotgun microphone itself. More amplification leads to more “electronic noise”.

A small parabolic microphone such as our KLOVER MiK 09, provides a mechanical amplification of approximately 6 times, due to the characteristics of the collector dish, for the sound coming from in front of the dish. This amplification, while the peripheral sound is being blocked by the dish itself, provides the directionality of the parabolic mic. 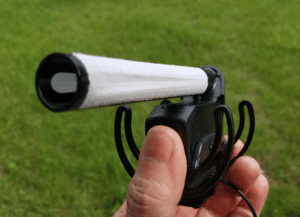