One would normally think that recording audio of airplanes at an airshow would be an easy task.  The planes are very loud and you are out in a wide open space.  It should be easy. 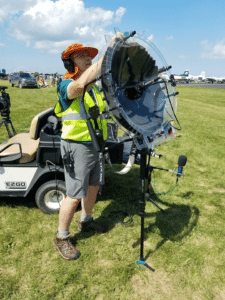 However, airshows set up a large public address system that blasts out music and an announcer.  The first problem is that the volume of the PA system is turned up to a level so spectators can hear the PA over the aircraft, at least for the majority of the show.  The second problem is that the music and / or announcer never stop.

These past two summers, we have worked with Steve Oakley, an audio engineer working with the video department of the Experimental Aircraft Association, to capture clear audio during the AirVenture airshow in Oshkosh, WI.  We developed a dual layer version of our KLOVER MiK 26 (26-inch) parabolic microphone to isolate the microphone from the PA system located behind it.

Steve has posted a video describing his experience with the custom parabolic mic.  The audio makes it clear how well the dual layer parabolic isolated the aircraft from the PA system.

While at the airshow, we also tested our small, KLOVER MiK 09 (9-inch) parabolic mic.  The primary question was if the small unit could capture the low-frequency sounds of the war planes.  It proved to be very effective at the low frequencies.  We analyzed the video and found the captured audio goes down to 40 Hertz.