The KLOVER MiK Makes It To the Little League World Series 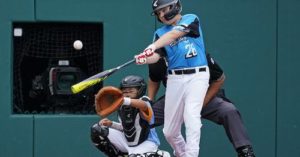 Mr. Barnhart said he used, “One at the home plate area shooting up the 3rd baseline, one at the home plate area shooting up the 1st baseline, and one behind home plate shooting at the pitcher and 2nd base. Those three mics were the foundation of the mix. I have used that setup for several years. I always got good results from shotgun mics, but where the mics have to be placed, they are back in a hallway that has the scorekeepers and other people walking around. I always got “extra voices” when I used the shotgun mics and with the switch to the parabs all that went away.”

He went on to say that he plans to use more KLOVER MiK parabolic mics next year. “I usually use shotguns for the pic mics at 1st and 3rd base, but on the last day of my games I tested the 9-inch KLOVER MiK for the 1st base pic mic, and I think I want to use those next year instead of shotgun mics.”